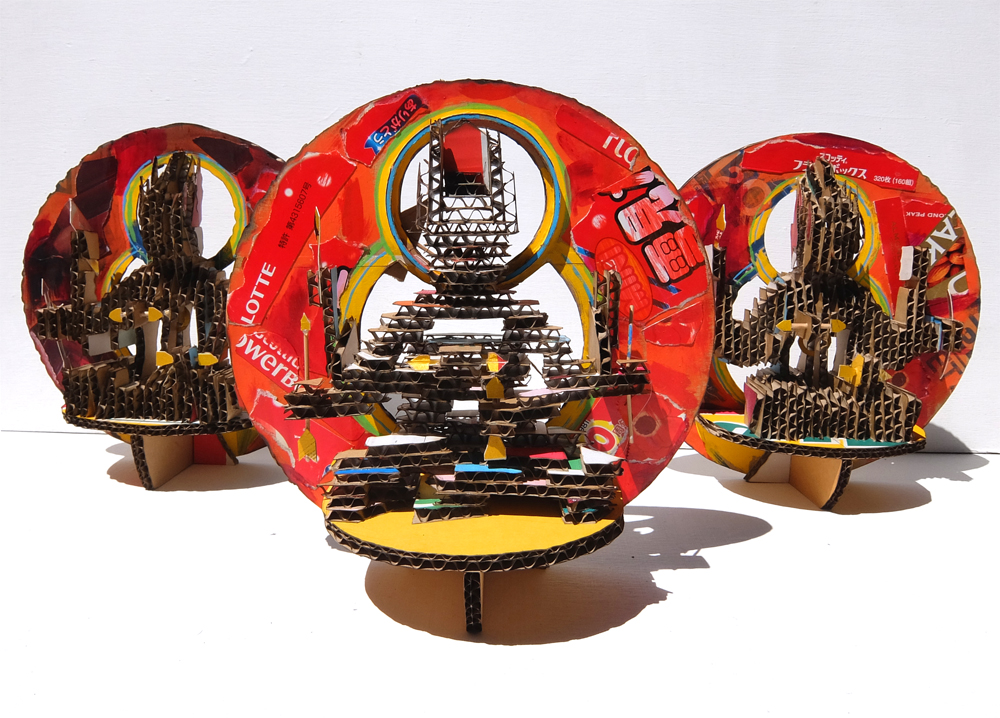 Gallery Yamaki Fine Art is pleased to present an exhibition of recent works by Yuji HONBORI from Friday, April 1 to Saturday, May 12.
Hombori has created a variety of buddist statues and structures with ordinary materials such as cardboards and wrapping papers, sometimes exhibited as large-scaled installations. His first solo show at our gallery will gather lively works such as Aizen Myouou, a dharmapala who presides over love and leads us to awakening, under the theme of “Passion.”

Yuji Hombori was born in Kobe in 1958. Having finished the graduate school in the Department of Sculpture of Aichi University of the Arts, he has energetically engaged in his creative activities while teaching art in his hometown. His turning point was an opportunity to create works with waste woods from a shrine, which led him to face with Buddhist statues. As a result, he thought of the recent series of works with cardboard, which are exhibited in Kobe Biennale in 2009 and in a solo show at INAX Gallery in 2010, gaining a huge attraction from the world’s art scene.
Constructed by sticking pieces of second-hand cardboards, they look transparent from the front as if filled with the light of grace. Meanwhile, seen from the side, they turn into masses consisting of complex layers and sections. This gap between the lightness of the material and the volume as a statue gives his work peculiarity as well as peacefulness.Through his creation, Hombori’s works make us aware that it is important to “reborn” items consumed in our daily lives. However, it does not mean that he is just engaging in recycling or environmental movement, but that his creation is based on the idea of “metempsychosis.”This idea derives partly from his experience of a huge earthquake in Kobe in 1995, which made him feel reluctant to use first-hand materials. His statues reutilizing disposable cardboards looks as if to model the wishes of those who underwent the terrible disaster.
He has turned garbage into the deities as objects of worship, advocating “a paper (kami, 紙) thrown away, a god (kami, 神) picked up” (parodying a Japanese proverb “while a god thrown away, another picked up” meaning “when one door shuts, another opens.”) Not only the surprise but also the dignity of his work cannot help but attract us. This exhibition will show his recent works including a monumental work more than 2 meters in height. Please do not miss this opportunity.