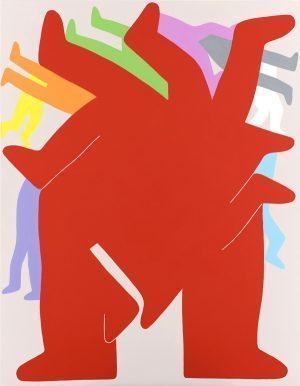 Nakatsuji was born in 1937 in Osaka. On graduating from senior high school, she started working for Hanshin Department Store in which she was assigned to the public relations department to be in charge of graphic design. Alongside her job, she also joined a group of fine artists where she worked mainly on life drawing and oil paintings. She left her job in 1962, the year she exhibited in “The 5th Contemporary Art Exhibition” and began her career as a full time artist.

In the following year she held a solo show at Tokyo Gallery in which she exhibited human shaped objects called “Poko Pin,” cute yet strange looking figures in various forms. Since then she been creating up until today works that feature “The shape of humans” in a variety of mediums including paintings, illustration books and objects. These were originally inspired by the objects she had made for your son. These human shapes were composed of various elements. Without a neck to separate the head and body, they have a lean torso with matching thin long legs. Neither with noses nor ears, their eyes are sometimes just dots or glaring at other times, with eccentric hair styles. Adorable but weird, they have a strong presence. Alike the Noh-mask which can transform its expressions depending on its angle or shading, Nakatsuji’s human shapes have a similar effect. Many different faces lie hidden beneath these simple shapes, despite not mumbling a single word. This may be a reflection of the gender issues which surrounded Nakatsuji at the time, an era when women were more oppressed than today, in which social positions were imposed on women with certain female roles as a wife or mother.

From the mid-70s, she developed two-dimensional works featuring human shapes composed only of contours of the face or eyes and in her recent paintings, eyeless human shapes have become evident. The shapes, furthermore refined, with organic curves and straight lines accompanied with a minimal color palette, draws in the viewers and even hints out the nature of “humans” or our “bodies” as a functional container. At the same time encountering such notion, viewers are to realize the limitless minds we human beings behold, which is too vast to be contained totally.

On view in this exhibition we will be around 20 works ranging from her early Human Shape wooden objects to the most recent paintings. We may detect dual expressions within Nakatsuji’s works such as; negative and positive, darkness and light. Taking advantage of her limited social status as a female at the time, she has developed her works with humor and richness, which she still continues to refine today.