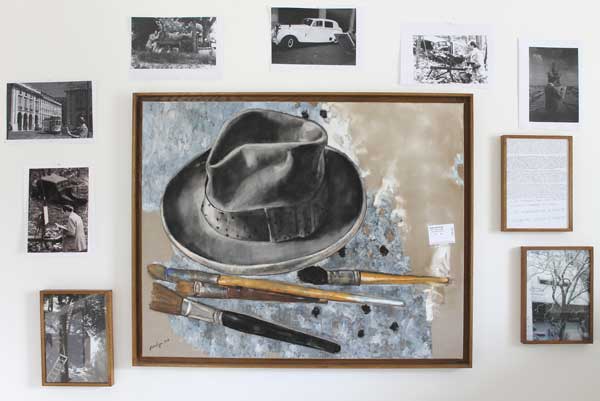 Born in 1936 in south of France, Le Gac first started his career studying traditional painting expressions and from the late 1960s developed works which combined painting, photography and text, receiving much acclaim especially in Europe. In 1972, he was selected to exhibit at the “Venice Biennale”, Italy (French pavilion) and in the “Individual Mythologies“ section at “Documenta V”, Kassel, Germany. In these exhibitions Le Gac presented a fiction documentary about a painter, which was the starting point for Le Gac himself, by composing photographs and texts in a booklet. In this way he explored his own methods of working around “painting” which was called into question at the very time.

Le Gac would set a situation of a family vacance, in which the artist and the family would spend time together, and painted/photographed sceneries of their leisure which he would then add with text. In the modern times, when the idea of the traditional artist, a being who creates “paintings”, has already become a thing of the past, he attempts to question “What is a painting?”, “What is an artist/painter?” by presenting a fictional figure of “The artist”. Works of his favorite writers; Alain Robbe-Grillet and Jorge Luis Borges, well known for mysterious avant-garde literature, are his inspiration sources for creating his novelized fiction. Viewers are driven to reconstruct their own narrative to bind fragments of paintings, photography and text left by Le Gac. His clues may seem like an autobiography of himself, however are all fictional, aiming to evoke an imaginary figure of an artist. Retracing expressions from the same era, his works resonate with Conceptual Art. Furthermore if we focus on the artistic movements within France, his works can be compared and linked with Christian Boltanski, Annette Messager and Sophie Calle. Le Gac’s works have been acquired by major museums worldwide including the Pompidou Center (Paris, France) and the New York Museum of Modern Art, yet there has not been enough opportunity to introduce his works in Japan.

This is Le Gac’s 3rd exhibition at Gallery Yamaki Fine Art, following the success in 2007 and 2011. This show will present around 9 works, featuring his important early booklets from 1960s, incorporating photography and text, along with his later installations works from 2010s composed of paintings and photography. Such a full-scale exhibition, showcasing the artist’s most important early works in his career, is to take place for the first time in Japan. Le Gac’s works, where the real and the fiction intersect, will flourish with richness when met with the viewer’s imagination and suspicion.