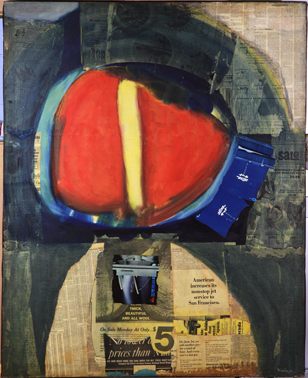 Kimiyo MISHIMA (1932-) is a female Japanese postwar artist who built her career in parallel with the Gutai Art Association during the 1960s and 70s in Kansai (Osaka), Japan. From the late 1950s and into the 1960s, when movements such as Art Informel, Abstract Expressionism, and Pop Art exerted a significant influence on Japanese artists, Mishima, responding to these movements, established her own style and invoked techniques such as collage and repetitive imagery to create signature works. Living in the Kansai area, where the Gutai movement flourished, she was deeply related with its members, however chose the Dokuritsu Art Association as her platform. She received numerous awards in their competitions, some in which she competed with Jiro Takamatsu. Recently her paintings have been reevaluated and collected in international museums, attracting further attention.
From the 1970s, she developed three-dimensional works and installations, capturing how information is turned into rubbish and discarded immediately, which includes the renowned huge rubbish bin installation exhibited permanently in Naoshima.
Throughout her career, Mishima has expressed “the fear and anxiety of drowning in information”, the notion she experienced during Japan’s postwar economic growth.